Salt, taste and the conceptualization of intelligence

Posted by Mapping Metaphor on the 24th of March 2016

Japanese macaques have become notable for their wintery visits to the local spa, but a group of them, native to the island of Koshima, have been observed developing an even more peculiar behaviour: allegedly, they season their food. This pre-cultural behaviour, as it is addressed by primatologists, probably started off as a mere coincidence: macaques already used to dip sweet potatoes and other goods in water to wash off the sand. Crucially, and possibly accidentally, a female macaque called Imo’ started dipping sweet potatoes in salt water. This behaviour spread among other individuals and across generations, to the extent that now it does not function any longer simply as washing, but, possibly, also as seasoning. Other macaques have been observed dipping their potatoes in salt water between bites, pretty much as Homo sapiens dip chips in ketchup. 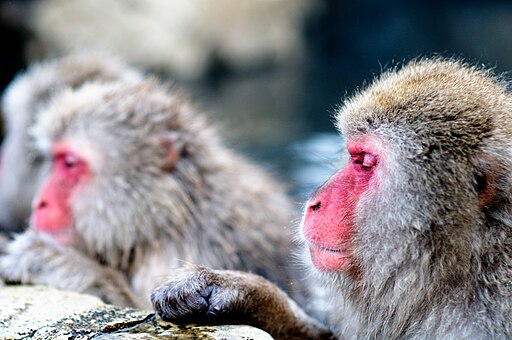 What macaques have recently discovered, or rather experienced, is the chemical property of salt (NaCl) to enhance flavours, by augmenting the volatility of aromas and hence their perceptibility. Salt is now found in all human diets, and Claude Marcel Hladik, a French primatologist, hypothesises that human exploitation of salt might date back to the early stages of the history of the genus Homo, i.e. roughly 2millions years ago.

In English, we can refer to somebody’s witty remarks as being salty (in the Metaphor Map’s 2A10 ‘Cleverness’ category), and someone’s speech can even be referred to as salted (OED, salted, meaning 3); conversely, if someone gives us the impression of being rather dull or stupid we can call him insipid (2A14 ‘Stupidity’). The word insipid originated in Latin, where it refers both to a lack of taste and of sensibleness. It derives from the verb sapio, -ere, which means both to taste and to know. In English, the lexical items related to this Latin root are insipid and insipidity (2A14 ‘Stupidity’, 2A15 ‘Foolishness’, 2A16 ‘Intellectual weakness’, 2A17 ‘Foolish person’), but the metaphorical link has motivated other expressions, such as †wearish (2A14 ‘Stupidity’) and †savourly (2A11 ‘Wisdom’, c1450–1664).

The conceptual metaphor that motivates this overlap is INTELLECTUAL ACTIVITY IS TASTE – but why do we have salty as a lexical item that describes intelligence and not, say, flavoursome, or tasty? Conversely, if the metaphor was *INTELLECTUAL ACTIVITY IS SALT, why don’t we have words that denote lack of salt (like unsalted, or sweet) to refer to lack of intelligence, as we would expect?

The reason behind the seeming incongruence in the metaphorical transfer lies in the chemical properties of salt (NaCl): its ability to enhance aromas lays the embodied foundations for a conceptual metonymy, in which a particular taste is understood as referring to the general capacity of tasting. This metonymy may be as old as the usage of salt, and one of its first linguistic realizations is to be found in the Gospel of Matthew (5:13) where Jesus refers to his followers as being “the salt of the earth”. It cognates with the Italian idiomatic expression avere il sale in zucca, which literally translates to “to have salt in the squash”: the squash refers to the head of somebody, and the overall semantic meaning is “to be sensible”. The metaphor though is epitomised in the Italian word sciocco, which means “dumb, stupid”; but it can also mean “unsalted, insipid” (mainly in Tuscany).

Salt is an important component in human diets, and its usage may be as old as the first individuals in the genus Homo. It is exploited throughout human cultures for several reasons, the most common being its ability to enhance flavours; and even our close relatives have recently experienced its chemical properties. A thread of metaphorical transfer seems to run from the Bible through Latin, Italian and English and helps modern humans conceptualise their own cognition and intelligence, their strength and weakness: salt.